Notes from the Manager

So… yeah. #250, and the first (I think) completely self-contained strip in a rather long time, although it might help if you have even a passing familiarity with American Girl dolls (particularly the "Just Like You" line) and with the existence of the Kit Kittredge: An American Girl movie starring Abigal Breslin (in limited release now, opening nationwide on July 2nd). That being the case, if you're a boy and you don't get this strip, I wouldn't really stress out about it. Really. 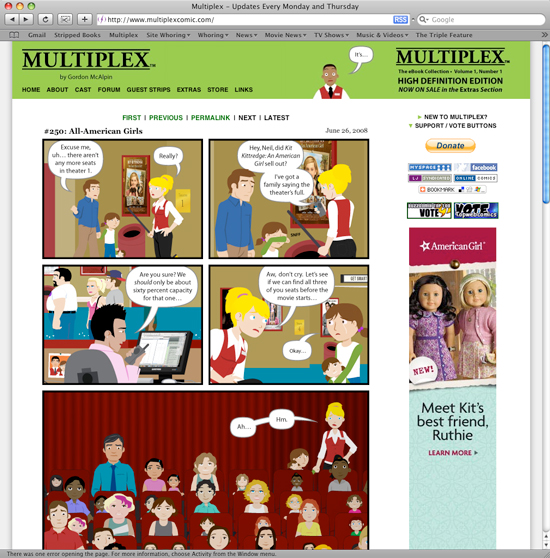 Anyway, so #250. It's not really a milestone, just a round number. As many of you know, there are a handful of other strips not in the archives, in the first Multiplex eBook and a one or two as-yet-uncollected ones from the upcoming second eBook (yes, I'm waaaaay behind, I know), so this is really not the 250th Multiplex strip.

The next real milestone for me will be the third anniversary, which is right around the corner, on July 10th — but I guess some people still think the round-numbers thing is pretty cool, so thank you for reading all the same.

By the way, despite my promise (to myself) that I won't be going to any comic book conventions until I have a frickin' comic book to sell, it turns out I will be appearing at this year's Wizard World Chicago after all — on Saturday (June 28) only. It's kind of an unoffical appearance, so I won't be in the program book, but you will be able to find me at Tom Brazelton's booth (#4308) in Artist's Alley, alongside Joe Dunn at the Digital Pimp booth (#4310). Stop by, introduce yourself, and I'll draw a crappy little picture for you… by hand, even.

Although Multiplex 10 has ended, an animated prequel/reboot called Multiplex 10 was funded through Kickstarter in 2017 and is NOW AVAILABLE for rent or purchase on Vimeo On Demand, Amazon Video, and elsewhere! And an all-new, irregularly-updated Multiplex 10 web series (set after the short film) recently launched on YouTube! Learn more about the web series on the official Multiplex 10 website!

Stay up to date on all things Multiplex, Multiplex 10 and me (a.k.a. Gordon McAlpin) by subscribing to my newsletter!